I got a call last night, Sept. 23, 2013 from a good friend a little bit before midnight. He said that there are thousands of people at Vicka’s old house in Bijakovici, right at the foot of Apparition Hill. I immediately called my son Stephen and asked him if he was asleep or where he was. He was in front of St. James he said, as he had just come from a birthday party at one of the pansions. I told him to just wait for me by the taxi stand and I would be right there. Then, I called my neighbor who is a guide here in Medjugorje and was going to ask her if she wanted to go, but when I called, she was already there.

So, I picked up Stephen and went. When we got to Vicka’s house I did see many many people there, huddled like it used to be when she used to give her talks on the steps.

I saw her brother outside and asked him when this all started happening. He said at about 9:00 is when someone noticed it. Later another guide told me that it was the youngest brother Frane who was going to lock up in the evening and he noticed that the Blessed Mother’s veil and her dress were shining a light.

It took me and Stephen about an hour and a half to finally get inside. There were the men who helped Mirjana on the 2nd of the month and so they were helping with getting the people up the steps and into Vicka’s old room in an orderly manner and everyone was really thankful for that.

So, up in the room, it was completely dark and you could see a little bit, Our Lady’s dress and veil were slightly glowing. It was hard to see at first. The way that others had described it was like the glow in the dark color. The people that were in the room at the time, went up and kissed the statue and said prayers. People were praying too outside before we got into the room, the Rosary.

After this, we went home and when I turned around, there were still many many people there trying to get in and up the steps to the old room.

Below are some pictures that were taken.

One girl I talked to said she believed immediately and she got chills and thought, could this be Our Lady trying to wake us up, could this be the beginning of things? She didn’t doubt at all.

I asked another lady, a Croatian shop owner who I know and talk to on the way to church and she said, “I love Our Lady, and when my friend called me and told me to come, she said, “I have Gospa here and everywhere. She is everywhere we invite her to be, why are you looking for her over there?”

One Irish man said, when he looked at it, he thought immediately that it was the same type of color and intensity of a glow in the dark statue, the florescent neon and as the night progressed, the glow got lighter and lighter as it does with the glow in the dark rosaries. He thought though that it was nice that people got together in the middle of the night and to jump out of bed to go and pray can’t be a bad thing.

A Local Croatian girl who works in one of the restaurants here said that she felt it was a wake up call for the people here. She completely believes this is a gift from Our Lady. She said, like Our Lady said, materialism it seems has gotten to many people here and that’s what she is feeling in Medjugorje that is maybe why Our Lady did this.

One person said she wished that everyone wasn’t running around looking for the extraordinary things but change their lives instead, and pray to show love and be good to others. People pushing and shoving not showing any love by trying to push their way into a room to get a glimpse of something special so they can feel special.

So, this is just in the course of an hour. Before Mass I talked with people and after.

This picture was taken without flash. 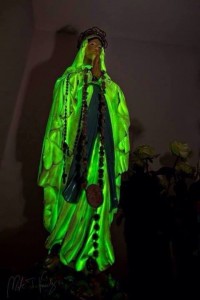 Here is the crowd of people waiting to get in but finally the guys in the yellow shirts came and helped with crowd control and having some kind of order. This was about 1:00 am I know there is a name for them but can’t think of it right now. I’m sure someone will tell me.

These are the steps that Vicka used to speak from. 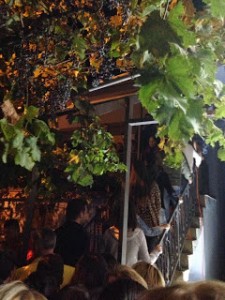