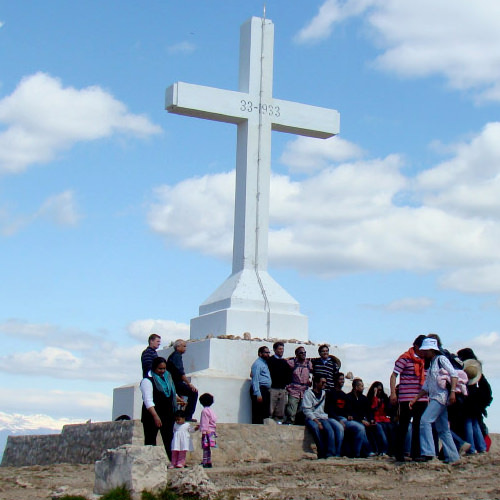 It has been said that the moon is the perfect analogy for Our Lady because the moon’s light is only a reflection of the sun shining upon it, but that reflection gives off so much light that it lights up the darkest night. In Medjugorje, the moon can be so bright you don’t need a flashlight to climb the mountain at night. Nights like this in Medjugorje are breathtakingly beautiful.

“Krizevac” means “Mount of the Cross.” It is the highest mountain in the area. In 1933, the parish of St. James erected a large concrete cross to commemorate the 1900th Anniversary of Jesus’ passion and death on the cross. During construction of the 16 ton cross, the parishioners carried up all of the materials, cement, sand, water, tools, etc., in memory of Christ’s way of the cross. The cross was completed on March 15, 1934.

Pope Pius XI proclaimed 1933 a Holy Year because it marked the 1900th anniversary of Our Lord’s death on the cross. Villagers repeat the story of the Holy Father who had a dream that same year, in which a cross was to be raised on the “highest Golgotha in Herzegovina.” An entry in the parish archives revealed that the parishioners performed this difficult task “in order to leave to their descendants a clear and visible proof of their deep faith in the Redeemer.” They raised the large cross during a particularly bitter winter. The villagers began to meet every year on top of the mountain for Holy Mass to celebrate the Feast of the Triumph of the Holy Cross, on September 14th. Under the communist government of the region, though it was forbidden to have any outside religious gatherings, the authorities made this one exception every year.

A relic of the True Cross of Jesus was received from Rome from Pope Pius XI and built into this cross. This relic was obtained from the larger part of the true cross that remains in the church of the Holy Cross of Jerusalem, in Rome.

Our Lady has said that the Cross on Mt. Krizevac was in God’s design.

“I love the cross which you have providentially erected on Mount Krizevac in a very special way. Go there more often and pray.”

“Dear children, the cross was also in God’s plan when you built it. These days especially, go on the mountain and pray before the cross. I need your prayers. Thank you for having responded to my call.”

Cross Mountain is central to one’s pilgrimage to Medjugorje. It is a penitential climb that leads pilgrims to reflect upon their relationship with God and what they need to change in their lives to draw closer to Him. Often deep healing, cleansing and peace is experienced at the summit of the mountain, at the foot of the cross, after pilgrims arrive at the top. Our Lady has made it clear in Her messages that it is Her desire to see pilgrims climbing both Cross Mountain and Apparition Hill.

“You are on a Tabor. You receive blessings, strength, and love. Carry them into your families and into your homes…“

It is always a moving experience to climb this mountain where Our Lady has appeared many times. Many pilgrims climb barefoot to add a little more to the sacrifice, old and young alike. It is also common to see people unable to walk, being carried up on stretchers or in chairs. It’s the faith of the people that is most impressive to see, among all those who climb the mountain, carrying not only their prayer petitions but their very hearts up the hill with the desire to encounter their Savior.

You will not see bags of sand, buckets of water, wood, iron or cement being carried up Cross Mountain today. It’s enough for most people to carry their sins up the mountain. Many, many pilgrims who go to Medjugorje have never climbed a mountain in their life—but they are drawn to Cross Mountain and with a deep longing, desire to make the climb out of love for their Lord, for the sorrow of their sins, or in seeking the answer to a prayer.